were unkind to each other,
or their dogs.

When he was a young man,
he studied hobo signs
chalked on railroad cars, mailboxes, fences,
buildings in barn yards,
in towns he probed.

Signs that said “doubtful”, “mean dog”,
“be ready to defend yourself”,
“dirty jail”, or “nothing doing here”
sent him away
or might draw him closer
to investigate.

He was a harvest hobo,
following the crops in the West.
Once beaten senseless, and left to die in a Fresno alley.
They laughed when they punched and kicked him,
stealing his knapsack and his kit.
The beating injured his brain.
He was never the same.
He lost all inhibitions and good judgment.

He couldn’t remember what rows to pick
when he picked grapes in Visalia
and oranges in Porterville.
He lost track of time, and had to write everything down.
He made little sketches so he could find his way
back to his box under the railroad bridge.

At night, he played his harmonica
until he dropped into dreams of his days as a boy
or his job with the city.

He dreamt of the beautiful woman that gave him
a whole pie when he begged for food at her door.
He dreamt of the old, black man that looked into his eyes for a long time before tears came.

The old man saw himself in his eyes.
He saw a man with even less than himself,
and it was more than he could endure.

The hobo impressed the dirt path
in front of the man’s simple cottage
with a new mark – a mark never seen before.
It was an austere eye,
a large tear in both corners,
made with polished pebbles
and shells he carried in his pack.


Bio: I am a retired educator, living on the Olympic Peninsula, Washington. My sunny days are spent with my dogs, paint box, and riding mower. I’ve been writing, seriously, for six years, which includes poetry and short fiction. My workstation overlooks my deck, and the web cam is pointed to the dog house in the back yard, where I can watch my fuzzy children nap and romp.
at 12:00 AM 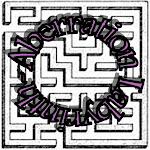